Would the Zetas care to comment on the recent report from Chicago's O'Hare Airport of UFO sightings? Was it actually an ET spaceship or just swamp gas? Also, any comments on France's space agency planning to put UFO reports on-line? Are they really going to come clean on this or just try to mislead the public?

These matters of disclosure and honesty in the media are not pressed forward so much by honest politicians and editors as by ourselves and our brethren, Service-to-Others extraterrestrials. We mentioned in 1995, at the start of ZetaTalk, that sightings would be on the increase, held back only by the anxiety of man. As acceptance increased, sightings would increase. Moving from individual or family sightings to mass sightings. Moving from a lack of any documented evidence to un-refutable evidence. In the past, the establishment wanted to deny the alien presence for their own security and stature. Politicians and the Church wanted mankind to cling to them as power figures, to look up to and fear them, and were concerned about a loss of stature if the truth about the alien presence were known. Project Blue Book in the US, harassment of contactees, and suppression in the media followed. But this campaign has not worked. The public embraces the alien presence, eagerly. What will happen to those in the establishment long suppressing the truth if undeniable sightings, and perhaps landings with waving smiling aliens, occurs? Worse than a lose of stature, as the public will be certain that the establishment knew about the alien presence and attempted to keep this information to themselves. The supposed leadership the elite assumes they have over the common man will plummet. Thus, seeing they are being bypassed and the visitors are going directly to the people, with great success, such incidents will be in the news, so the establishment can try to claim they too have only recently become aware of it. Dragged along in the dust, as the thundering crowd rushes to embrace the alien presence!

Signs of the Times #1658
In the sky! A bird? A plane? A UFO? [Jan 1] http://www.chicagotribune.com/ A flying saucerlike object hovered low over O'Hare International Airport for several minutes before bolting through thick clouds with such intense energy that it left an eerie hole in overcast skies, said some United Airlines employees who observed the phenomenon. Officials at United professed no knowledge of the Nov. 7 event - which was reported to the airline by as many as a dozen of its own workers - when the Tribune started asking questions recently. [and from another] FAA blames UFO report on weird weather [Jan 2] http://www.cnn.com/ Federal officials say it was probably just some weird weather phenomenon, but a group of United Airlines employees swear they saw a mysterious, saucer-shaped craft hovering over O'Hare Airport in November. [and from another] This then was mentioned on CNN, prime time. [and from another] People claim seeing a UFO in Istanbul [Jan 5] http://english.sabah.com.tr/ Mysterious lights seen in Istanbul skies have baffled people. Witnesses have claimed that the lights were coming from a UFO. People have called news agencies on Wednesday night and reported unidentified white lights flying in the sky. According to the eye witnesses, the flying object was revolving around itself and blazing. [and from another] Online Archive of UFO Sightings [Jan 2] http://www.techtree.com/ Reportedly, the French space agency has decided to publish its archive of UFO (Unidentified Flying Object) sightings and other phenomena online. 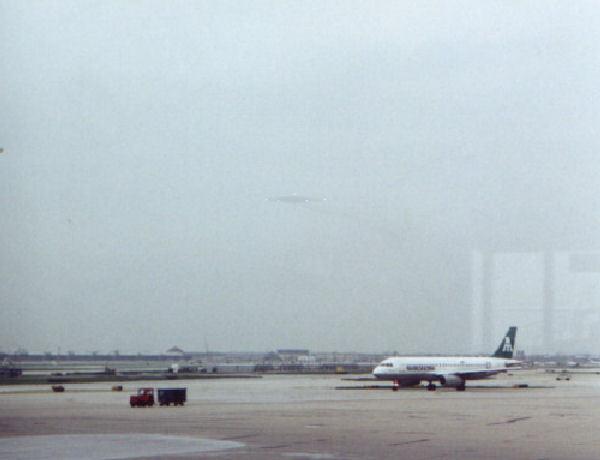