In trying to fit all known ZetaTalk together on a chart, showing where the planets are at various dates, there is a conflict. The Zetas say that the Point of Passage will have Planet X and Earth forming a triangle with the Sun, but this triangle puts Planet X inside the orbit of Venus. Yet in the most recent ZetaTalk on December 1, 2012 the Zetas said that Planet X would proceed outside the orbit of Venus at some point before the passage.  Can you explain? 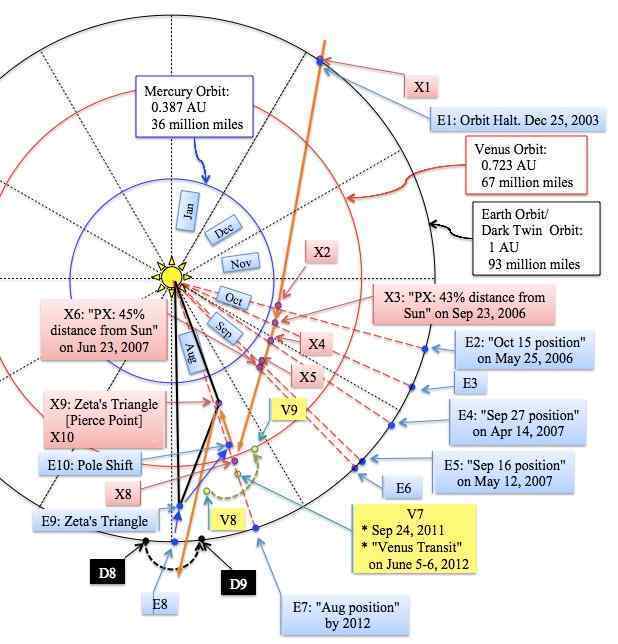 Does Planet X continue to take a straight path outbound from the Sun, pushing the Earth about during this process? At present, there is a virtual standoff, with 3 planets in front of Planet X - Earth, the Dark Twin, and Venus. The Dark Twin and Venus are not expected to escape this squeeze until the Last Weeks, but as Planet X comes closer, the magnetic clash between the Earth and Planet X intensifies. This is always assumed to be a drama for the Earth, though we have dropped hints along the way that some of this drama affects Planet X. We have stated that Planet X comes close, then retreats, then comes close again as the Last Weeks approach.

Planet X undergoes its second 270° roll prior to the Last Weeks, as when it pierces the Ecliptic it is forced to throw its S Pole upward, going into opposition along the Sun's magnetic flow lines above the Ecliptic. When Planet X itself goes into opposition, it is snapped back closer to the Sun, as it is now not resisting the N Pole of the Sun, and can tolerate the stronger flow of magnetons in the field closer to the Sun. Magnetic fields both push away and draw bodies closer, so this should not be an astonishing fact. The sequence of events is thus: