I am not sure if it was caused by any earth changes but there was an explosion in a chemical factory in South Korea and hence the gas leak of hydrofluoric acid which has affected crops, livestock and villagers near the plant. 5 people are dead so far and nearly 3,200 people have been treated for nausea, chest pain, rashes, sore eyes or sore throats after apparently inhaling toxic fumes. I would have thought that health and safety practices around these lethal toxic gases should be carefully managed at all times.  Gas leaks should not have happened and yet it went undetected.  This has proven to be a major disaster and yet it did not reach the main stream media.  The local government did not evacuate the people in the city when the gas leak happened and they have failed to take any actions to help their people.  I truly fear for their health and safety. Did this gas leak cause by land movements or earthquakes or purely human errors?  I understand that these industrial disasters will continue to happen more often around the world as we head towards the end times.  It would be unthinkable what the impact would be on earth if such disaster happens on a global scale which is very likely on the day of Pole Shift.  Similar to nuclear radiation, Is there anything Zetas can do to minimize the environmental damages and the loss of lives from these toxic industrial chemicals?
http://www.breitbart.com/system/wire/CNG---d904d843baa98996116afd1f892a1784---381
http://en.wikipedia.org/wiki/Hydrofluoric_acid

We, the Service-to-Other Zetas, have described what will happen to chemical spills during the hour of the Pole Shift. We’ve consistently stated that wave action along coastlines and the hurricane force winds and torrential waves will disburse spilled chemicals to greatly reduce their poisonous effects. As with preventing the Pole Shift itself, or saving the inhabitants of Earth en mass from trauma, this is forbidden by the rules as Earth is man’s 3rd density schoolhouse by which mankind is to have the opportunity to grow into the Service-to-Other orientation, helping their fellow man, rather than pleading for rescue.

If the Pole Shift itself will help cleanse industrial spills, by diluting them, what of the spills and explosions that might happen as a result of plate movement prior to the Pole Shift? This is an extension of the situation today, where the establishment is fraught with profiteering with an utter disregard for the health of the Earth or the common man. The elite assume they can live apart from the mess they have created, live safe in their wealthy enclaves, though they in truth are pissing in their own beds. We have advised the common man not to live near industrial facilities, though this is not always possible due to their poverty and need for jobs.

There is something fishy about a mainstream article discussing aging satellites and possible gaps in weather/storm forecasts.  The public is supposed to believe this is merely about mismanagement and failure to put up replacement satellites, although weather forecasts are a "top priority."  If extreme weather is due to global warming or climate change as is sometimes stated or implied, it makes even less sense that the United States would fail to ensure accurate forecasts. Is this disinformation designed to explain away expected satellite failures and possible lack of timely weather forecasts without, of course, mentioning the wobble or Planet X?  Can the Zetas provide their take on this? [and from another] Aging Satellite Fleet May Mean Gaps in Storm Forecasts http://www.nytimes.com/2012/10/27/us/dying-satellites-could-lead-to-shaky-weather-forecasts.html?pagewanted=1&_r=0&hp October 26, 2012. The United States is facing a year or more without crucial satellites that provide invaluable data for predicting storm tracks, a result of years of mismanagement, underfunding and delays in launching replacements, according to several recent official reviews. The looming gap in satellite coverage, which some experts now view as almost certain to occur within the next few years, could result in shaky forecasts about storms like Hurricane Sandy, which is now expected to hit the northeast seaboard early next week. Experts have grown increasingly alarmed in the past two years because the existing polar satellites are nearing or beyond their life expectancies, and the launching of the next replacement, known as JPSS-1, has slipped until early 2017, probably too late to avoid a gap of at least a year. This summer, three independent reviews — by the Commerce inspector general, the Government Accountability Office, and a blue-ribbon team of outside experts — each questioned the government’s cost estimates for the program, criticized the program’s managers for not pinning down the designs and called for urgent remedies. The project is run by Commerce’s National Oceanic and Atmospheric Agency, along with NASA. In a statement this week, NOAA called maintaining timely and accurate forecasts its “top priority” and said it “continues to develop mitigation plans for any potential gap” to protect the public.

We have stated that satellites will be knocked from the skies by debris in the tail of Planet X. This has happened steadily, but been on the uptick recently. Where we are anticipating an announcement by Obama, so that the cover-up over the presence of Planet X is finally dropped, until the 2012 presidential election is past this has been deferred. Meanwhile, those who fervently hope the cover-up will continue are doing their best to keep excuses in front of the public. How can an important issue like the continuity of weather satellites be overlooked or allowed to stagnate for over a decade? To now be pointing to incompetence at NOAA is absurd.

Two facets of the cover-up are at play here. First, they are proffering excuses for satellite failure ahead of time, setting this notion into the public mind. The message is that itt is not that satellites are being taken out by debris, but rather that they are aging and not being replaced properly because of incompetent management. Second, they are planning to under report weather threats, blaming the failure on poor satellite coverage. From the smoke filled rooms of those who fervently hope the plans by Obama to announce the presence of Planet X fail come these complicated disinformation campaigns. Better to cover their sorry behinds than to help the common man plan for survival. Such is their agenda.

Mexican media outlet Televisa has reported recently that a camera operated by themselves, which is trained permanently on the currently active Popocatepetl volcano, has captured an unexpected image of a large, seemingly cylindrical-shaped object appearing to travel, at speed, down into the belching throat of Popocatepetl Volcano. Said images were reported on and featured in news bulletins of what appears to be a mainstream Mexican news outlet. The above coming around the same time as reports surfacing on the web of sightings, over Tennessee and Kentucky, USA, among other nearby locales, of what may be a similar object to that which appeared to enter Popocatepetl Volcano, according to images captured by Pike County, Ky. astronomer, Allen Epling http://www.youtube.com/watch?v=gpo5LsICnEY
http://www.wkyt.com/wymt/home/headlines/Man-captures-pictures-of-reported-UFO-175502341.html
http://news-expressky.com/article_78bec0db-73c5-5b6d-914b-ff693ec949e9.html
http://www.huffingtonpost.com/2012/10/24/cylindrical-ufo-videotaped-amateur-astronomer_n_2011817.html
I wonder whether the Z's would care to speak to this, please? [and from another] http://noticierostelevisa.esmas.com/nacional/518179/fenomeno-luz-popocatepetl/ Light on the phenomenon of Popocatepetl. October. 26, 2012.  The House that Televisa has permanently recording the activity of the volcano Popocatepetl caught the moment that in a down light and apparently introduced themselves inside the giant crater. Approximately kilometer long by 200 meters wide, you can not appreciate where it comes from, but with a speed seems aircraft entering the crater. Is a cylindrical body, shows no excess shine on its front face and shadow. We went with the astronomer at UNAM, a member of the International Astronomical Union. The Scientific trarse was discarded incandescent material released by the volcano and return in free fall because not seen a path of light traced by the body to body in motion, same situation that precludes the possibility of it be a meteorite. The attention of astronomers certain characteristics of this object, first you have a clean line.

It is not by accident that a cylindrical UFO was captured in clear skies by an amateur astronomer over Kentucky, while being seen by numerous others in the vicinity, and captured by an official video cam pointed at Popocatepetl. UFOs visit volcanoes, as we have stated, to determine their status, and are not affected by the intense heat as would man-made devices.  Normally, a smaller UFO in a more typical shape is used – round or saucer shaped. The drama this time was employed so as to get into the news. The clarity of the photos and video taken by the Kentucky astronomer prove this not to be a weather balloon or falling piece of space junk, as it hovered without moving.  Likewise as an object plunging into the volcano, it fell outside of what would be expected – a meteor or a hunk of lava being spat out of the volcano. Both issues happening in close succession allow for greater press coverage, which was the plan.

This question is in regards to the "superstorm" Sandy.  It is said that it is quite peculiar and certainly something more massive and destructive than we are used to yet had surprisingly few casualties.  My questions is was this storm "assisted" to its location and perhaps even enhanced as part of the events that the Zeta said may occur before the election to allow the public to see how compassionate Obama is in a major disaster? http://www.msnbc.msn.com/id/49605748 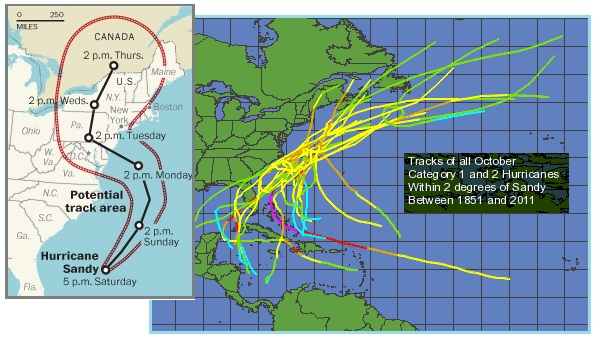 Sandy was a natural storm that was allowed to proceed without intervention. As with Irene in 2011, hurricanes running up the East Coast of the US are being affected by the Earth wobble to the point of being noticeable in their path veer. The upper Atlantic is no longer welcoming for these low pressure areas, which choose rather to move inland in the US where the heat of the Earth has created upward convection of air. Arctic air, chilled and thus high pressure zones, has been pushed down from the Arctic over the Atlantic, blocking the path of these hurricanes on occasion.