A clear video of an UFO hovering in the sky at the Olympics 2012 Opening Ceremony during the firework display. Video by telegraph.co.uk 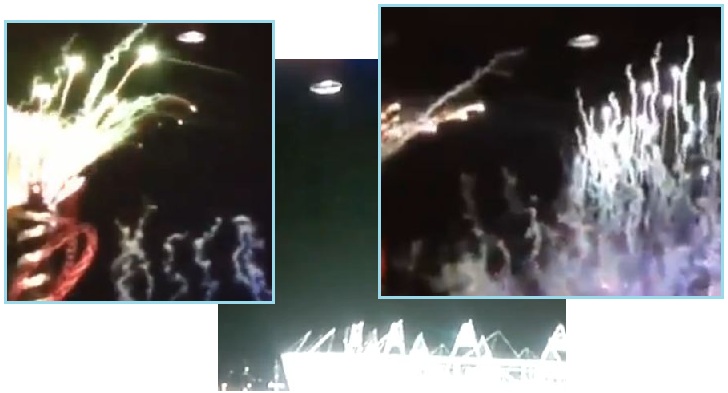 As has happened in the past, a UFO display showed up at an event where many private video cameras were recording the event. This was the case during the 1991 Eclipse in Mexico. Undeniable because it had been recorded by the public, on so many private cams, that the display could not be dismissed as a case of doctoring the film. The 2012 Olympics opening was another such event, recorded live and delivered to audiences around the world. By the time the authorities realized what was happening, it was too late. YouTube videos of the event have already gone viral, and official news channels had no choice but to admit it, and even discuss it – Skynews leading the way.

New Large Crop Circle 28th July 2012 at Etchilhampton, nr Devizes, Wiltshire, UK. It looks genuine but what does it mean if it is. http://www.cropcircleconnector.com/2012/Etchilhampton2/etchilhampton2012b.html

The precision of the circles and the design overall, the circular lay inside the circles with a center tuff remaining – all show this to be a legitimate crop circle design. What is its message? This design represents the Earth wobble, which has lately become so noticeable with the Sun rising and setting in the wrong place that the common man is talking about it, even when they have not heard about Nibiru or Planet X or ZetaTalk. The wobble is palpable, to one merely gazing at the design – the flipping back and forth of the globe, with the N Pole being the focus of the push back and forth.

370 million in India power outage. Is this associated with the continuing movement of the Indian plate? While it is a big story, doesn't seem to be getting enough attention. That's more than the total population of the US and Canada. [and from another] http://www.cbsnews.com/8301-202_162-57481990/india-power-outage-plunges-370-million-into-sweltering-darkness/ The government was setting up a three-member panel to look into the failure of northern power grid. It was the first time since 2001 that the northern grid had collapsed. But India's demand for electricity has soared since then as its economy has grown sharply, and the outage was a reminder of the country's long road ahead in upgrading its infrastructure to meet its aspirations of being an economic superpower. In addition, a weak monsoon has kept temperatures higher this year, further increasing electricity usage as people seek to cool off. Shivpal Singh Yadav, the power minister in the state of Uttar Pradesh, home to 200 million people, said that while demand during peak hours hits 11,000 megawatts, the state can only provide 9,000 megawatts. The grid collapsed because some states apparently drew more power than they were authorized to take to meet the summer demand.

Other than the unusual drought afflicting India as it is in many parts of the globe, and the excessive high temperatures which likewise are afflicting many parts of the globe, there is no Planet X factor associated with this massive power outage. Rolling blackouts, where a brownout causes automatic shutdown, are common and well known. They have happened in the US in recent years, during summers in an overheated southwest. Too much consumption of electricity creates an inadequate flow, a brownout, and this damages equipment so an automatic shutdown occurs. This then shifts the problem to another network which shuts down even faster.

There have, and will be, occasions when the charged tail of Planet X creates surges, blowing up hydroelectric generators or forcing an electrical grid to shut down due to a surge, too much electricity, which is just as damaging to electrical equipment as a brownout. The solution, of course, is to prepare for what is coming – the Pole Shift with the loss of almost all of mankind’s infrastructure. Trains will be derailed even without outages. Lights will fail to go on, so candles or fumbling in the dark will be the only option. The political and corporate overlords, supposedly serving mankind, are not doing them a service by denying them the knowledge of what is coming. This is but a taste.

Here we are talking about the earth changes, about how life is not easy after the pole shift, but I have been read from many archives Zeta answers, I realized that the Earth is now live four or five billion people who do not have a full reincarnating soul. I have long been concerned by this question. Should all these people care about the transformation, the alien presence, Planet X and the Pole Shift, if they do not have a future after death? After all, human life is so short and fragile and living in a time like now it's doubled, and in fact most of them should worry about unsaved soul.  All these people who are living at the time of the passage of Planet X as if drawn into a more complex and a short level with only one life and if they do not pass they will be erased, deleted forever. It will look like formatting the hard disk memory of the earth, when all the unnecessary files in this case, the inferior souls will be permanently deleted from the memory of the Universe, right? Because we live in is not easy and stressful time at risk is theoretically every ordinary person who is not aware of the status of their souls. Actually be dispersed after death is the worst that can happen to a man, worse than any physical torture, or a terrible death. In general it seems to me that the people who have no spark at least they are less intuitive and can actually assume the reality of extraterrestrials and Nibiru, they do not even seem very worried about their afterlife, and yet the possibility of development in other higher worlds very attractive compared to the heavy existence on earth.

Unsparked souls are quite unaware of their status. Those humans incarnated with old souls may have a sense of mission, or déjà vu at times from past lives, and conclude they have an incarnating soul. Myths about ghosts, haunted places, visitations from loved ones who have moved on, and the rituals and dogma of religions around the world confirm that spirits exist, and man has an indwelling soul. Those humans who have an unsparked soul simply conclude that they do have a sparked soul, and proceed with their lives. Dissipation after death is not painful, nor even filled with remorse.

If the human had a sense of mission, a determination to accomplish something that was going to be left undone upon their death, then this is an indication that they had already sparked!  For an unsparked soul, the only regrets they have at death are for the uneaten cake in their cupboard, or the recent pain they experienced from an injury prior to death. It is not that their life and death is insignificant, it is that no sense of purpose outside of their life had developed. It is the same for a red rose, a great oak, or a dolphin. They are things of beauty, but do not have a lasting spiritual existence.

http://youtu.be/Qzs9ZOsjF-c Nasa is explaining another reason for New data from NASA's AIM spacecraft proves that "meteor smoke" is essential to the formation of noctilucent clouds. Are they again doing another Never A Straight Answer for the charged tail of Planet X, can the Zetas please comment?

Noctilucent clouds are on the increase due to the wafting tail of Planet X. We have explained that greasy elements in the tail create a chemical glow, which is akin to the chemical light sticks that mankind uses like a candle to see in the dark. Have these clouds appeared in the past, during volcanic eruptions or after meteor storms? We have explained that the heat of volcanoes can act as a refinery does, creating petrochemicals in the atmosphere overhead. Meteors, aflame as they burn in the atmosphere, are usually carrying the same chemical mix as the tail of Planet X. Since the chemical process is similar, more than the tail of Planet X can create such a glowing cloud, but theincrease at present is due to the presence of Planet X. It is an attempt by NASA to discount Planet X that has inspired this new educational video from NASA. They are still seeking to deny the presence of Planet X.