Will this actually work? What would happen to both souls incarnated? [and from another] http://www.dailymail.co.uk/news/article-3117029/I-m-not-going-crazy-cut-head-Disabled-man-volunteering-HEAD-transplant-meet-surgeon-time-tomorrow-insists-ll-knife-99-possible.html  Leading Russian surgeon, Anzor Khubutia, director of the Moscow-based Sklifosovsky emergency hospital, warned that Canavero's plans were 'reckless'. 'This may be real in the future,' said Khubutia. 'But it's hard to talk about head transplantation before spine regeneration becomes possible.' And the Russian Health Ministry's chief transplant expert Sergei Gotye warned: 'I have no answer to the question of how to make the transplanted head control the donor body. And I am not sure Canavero has either.' Indeed, his plans seem so unbelievable there has even been speculation that it may be an elaborate hoax. Canavero is not the only doctor looking at whether a head transplant is possible: China's Dr Xiaoping Ren has released pictures of some of the 1,000 mice he has given head transplants.

Since this procedure has been done on mice, it is obviously physically possible. Unless bodily functions are controlled by the spine, the body is essentially dead. When the spine is cut, that’s it. Spinal regeneration has not yet been achieved by human doctors. The heart beats, digestion proceeds, but the brain’s control over movement is not there. What is the point of this gambit by the surgeon? He hopes for fame and to be rolling in money from wealthy individuals who fear death and are dealing with a dying body.

Since the human body can be incarnated and it is possible for both the head and the body to be incarnated, which soul would incarnate the resulting conglomeration? This issue is easily settled if one considers that a body would not be available unless the head of that body, the brain, were quite dead. Ethics would not allow someone who was not brain dead to be sacrificed. Thus the incarnating soul of the body would have long moved on. The soul incarnated in the head to be transplanted would in all likelihood prevail. Should there be a contest, it can and does happen that a crowded incarnation would ensue, or the soul formerly in the body lingering as a ghost.

What about this latest crop circle? It seems to represent some time line if you count the 'flags' and then at some point they get larger.  Could the Zetas say something about this crop circle? [and from another] http://www.cropcirclecenter.com/ccdata/2015/06/20/IT20150620_A.html

This beautiful design is depicting the time in 2003 when Nibiru entered the inner solar system, on the opposite side of the Sun from the Earth. As Nibiru proceeded past the Sun in its almost straight line orbit, it encountered the Earth in its orbit and eventually the Earth’s Dark Twin. The Earth’s orbit has stopped and the Dark Twin ha arrived, coming up behind the Earth in their shared orbit, so both are now close together. The hefty influence of Nibiru, as a planet 23 times as massive as either the Earth or the Dark Twin, is shown by the size of the circles representing these planets.

Is this a moon swirl reflection in the clouds?   It whips about and changes shape. [and from another] https://youtu.be/d0AgPSoZHyM  During sunset, Indiana, June 2015.

Obviously the weather was stormy when the video was captured. Thunder can be heard, and dark clouds are passing overhead. The upper atmosphere thus was in turmoil, atmosphere layers moving in different directions, passing over each other creating friction. This is the type of weather that can produce tornado activity, swirls. Tornados normally form in the upper clouds and drop to the ground as the swirling intensifies, reaching out and involving more of the surrounding air masses in the swirl. Lightning is produced during thunderstorms by the friction between air masses. This dramatic video has captured a type of lightning that is not grounding but is reaching upward instead, thus going in a swirl in a tornado precursor that failed to develop into a tornado.

Pyramid on Mars? [and from another] NASA's Curiosity Rover Snaps Pyramid On Mars, Is This Proof Of An Early Civilization? June 21, 2015 http://www.starpulse.com/news/index.php/2015/06/21/nasas-curiosity-rover-snaps-pyramid-fo In the latest news on space exploration, NASA’s Mars rover found what looks like the image of a Great Pyramid found back on Earth. The images are part of a series of anomalies found on the Red Planet. This May 7 “pyramid” image has stargazers believing that intelligent life exists or once thrived on Mars. What stands out about the photograph is the symmetry. A telltale sign that differentiates a natural formation from a manmade one is its angles and lines. [and from another] 'Pyramid' Spotted on Ceres June 22, 2015 http://www.dailymail.co.uk/sciencetech/article-3134836/Pyramid-spotted-Ceres-Mysterious-lone-mountain-discovered-towering-surface-dwarf-planet.html The latest images of Ceres taken by the Dawn spacecraft have captured a fascinating pyramid-shaped mountain on the surface. The structure is thought to rise about three miles (five km), which is roughly the height of Mont Blanc in France and Italy, the highest mountain in the Alps. 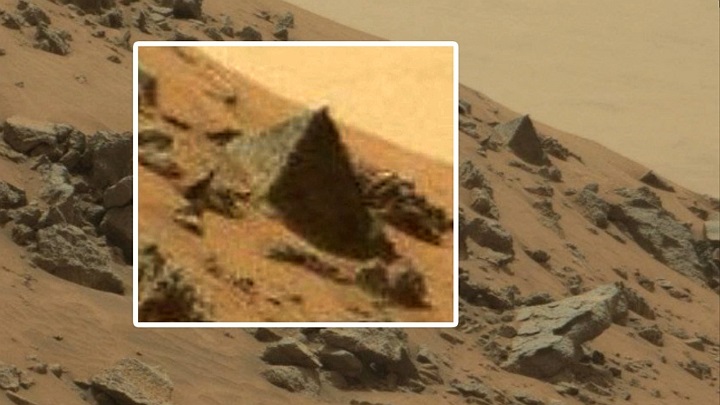 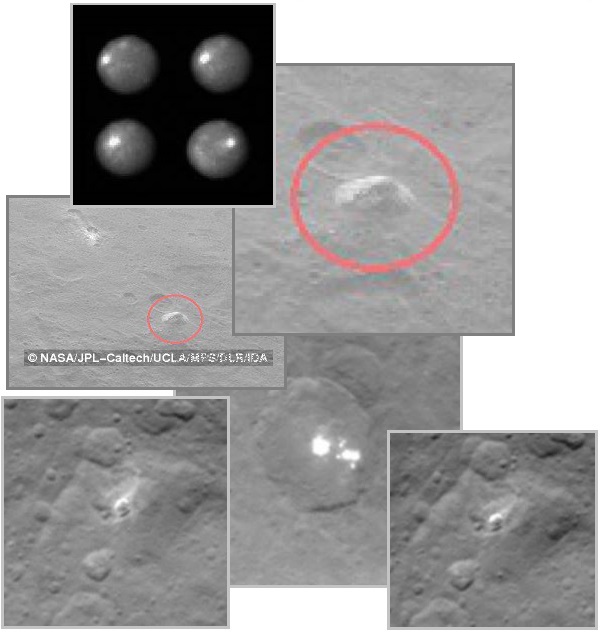 It is a coincidence that both Mars and Ceres have a pyramid? The pyramid on Mars is clearly Annunaki handiwork, not a natural formation. The Annunaki were preferential to pyramids for their stability, as can be seen from the many pyramids scattered throughout the Earth. They have a firm footing. That this image was released by NASA is part of the continuing gradual disclosure of the alien presence. What of the pyramid on Ceres? This also is not a natural formation but it is also not Annunaki. The alien space ports on Ceres are located where there are depressions, so that trash and what might be called space wind do not strike them.

But for communications a higher point works best, and that is what this mound is for. It is a communication tower, of sorts. Transmissions can be sent from one Ceres port to another, or be easily caught if sent from outer space. As with the Rosetta comet port, located due to its use of radio signals, these communications may seem primitive for advanced alien technology, but Ceres and Rosetta ports are both serving aliens in the Service-to-Self, and their technology simply does not equal the technology of those in the Service-to-Other.

Lots to wonder about here -- are these real or is story a possible future excuse for continued EM disturbances? [and from another] http://www.sciencealert.com/australian-student-confirms-that-giant-plasma-tubes-are-floating-above-earth  Australian student confirms that giant plasma tubes are floating above Earth. Astronomers have for the first time captured visual evidence of the existence of tubular plasma structures in the inner layers of the magnetosphere surrounding the Earth. For over 60 years, scientists believed these structures existed but by imaging them for the first time, we’ve provided visual evidence that they are really there. The discovery of the structures is important because they cause unwanted signal distortions that could, as one example, affect our civilian and military satellite-based navigation systems. The region of space around the Earth occupied by its magnetic field, called the magnetosphere, is filled with plasma created by the atmosphere being ionised by sunlight. The innermost layer of the magnetosphere is the ionosphere, and above that is the plasmasphere. They are embedded with a variety of strangely shaped plasma structures, including the tubes.

This new science alert is not a new discovery but a new means of capturing on film what mankind has long known – the Earth has a magnetosphere. The magnetic field of Earth is envisioned as lines curved from the N Pole to the S Pole. This view has been determined by the placement of the compass in various places around the globe, and by measuring the Earth’s magnetic field from space. We have described how the Sun and planets have intertwined magnetic fields, and the solar system caught in an even larger field. The magnetons run heavily in what might be termed rivers, so are not evenly distributed around a planetary magnet. In 2009, magnetic ribbons in space discovered by NASA’s IBEX probe documented that concept.

Would the Zetas care to comment on this most recent crop circle?  It seems like the others to be saying that we are now in the thick of it.  [and from another] http://cropcircleconnector.com/2015/greenstreet/greenstreet2015a.html

Humans have a term – “boxed in” – meaning there is no escape. From all side, all 6 sides of the box in fact, there is no escape. In a 2D diagram this can only be shown as being boxed in from all 4 sides, but the meaning is the same. The Earth has been caught in front of the approaching Planet X, aka Nibiru, for many years, in an increasingly squeezed cup formed by the eddy flow of particles coming round behind Nibiru from the Sun. Venus and the Earth’s Dark Twin are likewise caught in this cup. There is pressure on all side, for the Earth – from the solar wind, from Nibiru, and from Venus and the Dark Twin.