Queensland Flooding 'Could Last Weeks' [Dec 29] http://www.stuff.co.nz/world/australia/4499963/Queensland-flooding-could-last-weeks Residents evacuated from flooded Queensland towns have been warned they may not be able to return to their homes for weeks. The last of Theodore's residents were evacuated this morning, with all eyes now on Bundaberg, where residents are today bracing for the city's highest flood in 50 years. The evacuation of an entire town is unprecedented in Queensland. These floodwaters are likely to remain high for a long period of time. In some cases that might be measured in weeks, rather than days. Rail services have been suspended after water rose over the Burnett River bridge. Evacuations are also underway in the town of Emerald, nearly 600 kilometres north-west of Bundaberg, with authorities warning the Nogoa River is expected to rise 300 millimetres higher than it rose in the devastating flood of 2008. Meanwhile residents in the flood-ravaged town of Dalby on the northern Darling Downs have just two days' supply of drinking water left after the region's water treatment plant was inundated. The swollen Myall Creek inundated more than 100 homes in the town earlier this week, forcing about 60 residents into evacuation centres.

In warning about the effects of the pole shift tides, we have often mentioned that a slosh can run up river. This prevents the rivers from draining, and thus, rivers will rise beyond their flood level, to an astonishing degree. Where the current flooding along coastal Queensland is not due to the pole shift tides, it is related to the rising of the eastern edge of the Indo-Australian Plate. As the buoys in the area show, the entire region is rising. Water trapped between two land masses has difficulty redistributing quickly and smoothly, as every direction has water rushing about, trying to find the lowest level. The sudden rise in the floor of the seas around eastern Australia caused this water to flow west, primarily, and for the coast of Queensland, this included flowing up river. There has been, as we predicted, an attempt to disguise this slosh by pointing to the weather. Weather reports are pointing to rainfall along the coast, where this slosh is most noticeable. But why would rainfall on the coast cause such extensive flooding upriver? The cover-up over the effects of the plate movements in this region will not succeed, nor will it fool the public for long.

The eastern edge of the Indo-Australian Plate holding New Zealand and Queensland appears to be almost undulating as it tilts up. The Coral Sea, which has bulged up for many months, a bending point relieving the weight of the eastern part of the plate which is rising, has suddenly flatted out! Water is rapidly deepening there, as though the sea floor has fallen. Per the Zetas the Coral Sea bulge has now relaxed, as magma flow under the lifting eastern edge of the Indo-Australian Plate has increased.

Has the Coral Sea floor stopped bulging, just as the eastern edge of the Indo-Australian Plate continues to lift? The deceptive depth of the water is in part due to this, and in part due to the massive amount of water flowing from the lifting edge, which is attempting to find its level as water does. Queensland flooding along rivers that normally drain into the Coral and Tasman Seas is excessive and breaking all records, and certainly not accounted for by any trivial rain it has received over the past few days. But the Tasman Sea is reflecting only a scant increase in water level depth, where the Coral Sea is dramatic. What could cause the plate to flatten, as the eastern edge tilts higher? Certainly, the weight being lifted has only increased. What has occurred is a deeper adjustment in the magma flow under the plate, where the Coral Sea bulge dealt with a temporary situation. The magma flow is now sweeping under this tilted plate, thus relieving the weight of the eastern edge of the plate so the Coral Sea can relax. 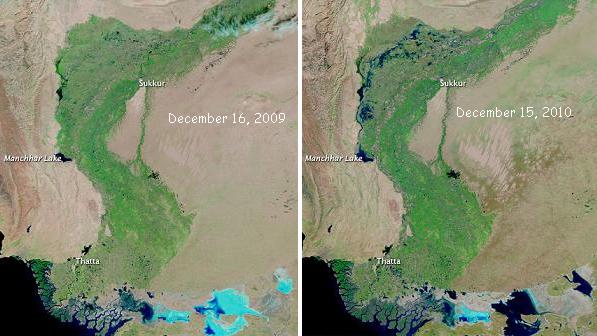 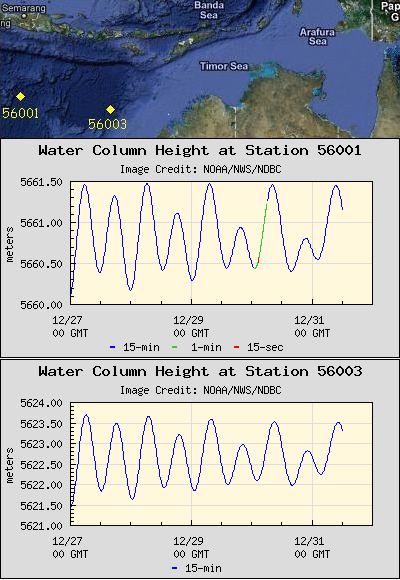 We predicted a tipping of the Indo-Australian Plate during the 7 of 10 scenarios, as in fact the first step to occur. Of course this has been ongoing with the western edge of India dropping, creating a loss of 10 feet or so of elevation in Pakistan along the Indus River and in western India just east of Karachi. Now the tippping of the plate at the curve is being noticed. These are rapid changes, in the last days of December, 2010! Certainly, by lifting, the stage has been set for a more rapid plunging of the southern edge of the plate tongue holding Java. We have stated that the loss of elevation in Indonesia will take place in steps and stages over a 2-3 week period, at first very gradual and then increasing. Expect more shortly!

In step with the Coral Sea changes, and the rising of the curve just below Java, are sudden changes in the Caroline Plate above New Guinea. Just three days earlier buoy 52403 showed a rapid rise in the sea floor on this little platelet, but now the depth is plunging! What's going on here?

If the Indo-Australian Plate is not only tilting up on its eastern side but also tipping sideways to raise the curve just under Java and Sumatra, what would this do to relieve pressure in the small platelets just above New Guinea? Here three great plates meet, so the little platelets are fragments very much susceptible to changes in any arrangement the larger plates make. The tipping of the Indo-Australia Plate has allowed this platelet to drop where before it was under pressure from the Pacific, and snagged at the edges, thus lifted with the Indo-Australian Plate.