This is not the first time these creatures have been seen. The most alarming issue is that they look like humans. And they have been seen in other parts of the world, too. Is this a hoax? If legitimate, what are they? Where do they come from? What are they doing here? Would the Zetas like to comment? [and from another] https://www.youtube.com/watch?v=ERWdfQX-kso  [and from another] https://en.wikipedia.org/wiki/Holography  In its early days, holography required high-power expensive lasers, but nowadays, mass-produced low-cost semi-conductor or diode lasers, such as those found in millions of DVD recorders and used in other common applications, can be used to make holograms and have made holography much more accessible to low-budget researchers, artists and dedicated hobbyists. Holograms can now also be entirely computer-generated and show objects or scenes that never existed. Holography can be thought of as somewhat similar to sound recording, whereby a sound field created by vibrating matter like musical instruments or vocal cords, is encoded in such a way that it can be reproduced later, without the presence of the original vibrating matter.

This is a hoax produced by something akin to holograph technology. Crude holographs can be projected on screens by inexpensive equipment, so that amateurs can produce such scenes. Note that the sky is cloudy, with low lying clouds, which is similar to a white sheet hung as a backdrop. On occasion a shadow of the projected image can be seen, briefly, so that the viewers are unlikely to notice but the video frames have captured these shadows. What is the point of the hoax? Beyond making the hoaxer feel empowered at his ability to fool others, it is to enhance stories told on the Internet about flying men, aliens living among mankind and the like.

And the pressure continues. [and from another] http://www.dailymail.co.uk/news/article-3165923/Pictured-Queen-taught-NAZI-SALUTE-Edward-VIII-secret-1933-film-Balmoral.html  Buckingham Palace reacted with fury after footage of the Queen performing a Nazi salute as a young girl was released by The Sun last night. The shocking film from 1933 shows Edward VIII teaching his nieces the seven-year-old future Queen and her three-year-old sister Princess Margaret how to do the salute in the gardens at Balmoral. The publication of the 17-second film has outraged many across the nation who believe that the Queen cannot be held responsible for her actions as a girl playing with her family. The clip shows the Queen Mother also saluting proudly alongside Princess Margaret, aged three. They are encouraged by Edward VIII, who is known to have harboured Nazi sympathies. The Palace is expected to look into whether a crime has been committed in the leaking of the film, which belongs to the royal family. Edward began communicating with Hitler shortly after he was elected Chancellor in 1933. After his abdication in 1936, Edward became an outspoken critic of Churchill. Edward VIII, faced numerous accusations of being a Nazi sympathiser, abdicated in 1936 less than a year after becoming King to marry Wallis Simpson.

In both cases, the cover-up crowd was reminded that the Council of Worlds was barely frowning at them, during the war, and had the ability to do real damage if it chose to do so. It should not be a surprise that the Queen, who does not hesitate to steal elections and plans to desert her people when the time comes to leave the UK, is likewise getting a reminder. Cameron and the Queen are firmly in the ranks of the cover-up crowd, and plan to block information from reaching the citizenry as much as possible. The Council of Worlds is warning the Queen. Proof of royal pedophilia also exists, and could be released. Do not cross the Council of Worlds!

But as these caves were dug? Here the matter is mysterious, because the scientific community agrees - there were machines at work. My question is: Perhaps also a craft by the Annunaki? [and from another] http://www.pravda-tv.com/2015/07/mysterioese-hoehlen-in-der-oststeiermark-vor-10-000-jahren-mit-maschinen-gegraben-video/ Under the Eastern Styria in Austria, there is a still poorly understood labyrinth of caves and corridors. What the researchers can puzzle above all: The more than 10,000 years old corridors seem to have been built with machinery. Underground caves and tunnels criss-cross the Eastern Styria. But only a fraction of it is known. In recent years, more than 800 systems have been researched and scientifically documented. We have a guideline, and are more than 10,000 years, where the gears were already there. This is unbelievable for the Stone Age. We have scanned these passages precisely to 0.2 millimeters, and may find that only deviations are from 16 millimeters on long stretches there. This is even now impossible with today's machines. They were originally no hiding, no deposits and no places of worship, but were used at all times as such. [and from another] https://en.wikipedia.org/wiki/Troll A troll is a supernatural being in Norse mythology and Scandinavian folklore. In Old Norse sources, beings described as trolls dwell in isolated rocks, mountains, or caves, live together in small family units, and are rarely helpful to human beings. Smaller trolls are attested as living in burial mounds and in mountains in Scandinavian folk tradition.

These tunnels in the Austrian alps are indeed connected to the Annunaki and their Service-to-Self allies. We have described a fat squat snake creature, highly Service-to-Self, that was attempting to seduce the Annunaki by providing them with services such as levitating large stones and cutting stone with precision. The fact that these tunnels were machined with this precision marks this as their handiwork. We have mentioned a dwarf race that had been installed in Tibet, servants to the squat snakes who were their masters. These dwarfs required the air to be thin, thus lived in Tibet, but they were also installed in the high alps in Austria to be closer to the Annunaki in Germany and Scandinavia, such as Thor, whom they were ordered to serve.  The troll legends in Scandinavia relate in great part to accidental encounters with these dwarfs.

Stephen Hawking pledging $100 million for "hunt for aliens" -- Is Hawking in the loop on PX/ZT? This also seems surprising given his past comments about being afraid of aliens. Is Hawking STS? [and from another] Hawking Pledges to Find Aliens http://www.washingtonpost.com/news/speaking-of-science/wp/2015/07/20/stephen-hawking-announces-100-million-hunt-for-alien-life/ Stephen Hawking announces $100 million hunt for alien life. Famed physicist Stephen Hawking and Russian tycoon Yuri Milner held a news conference in London to announce their new project: injecting $100 million and a whole lot of brain power into the search for intelligent extraterrestrial life, an endeavor they're calling Breakthrough Listen. Scientists have found a surprising number of Earth-like exoplanets in recent years — rocky planets the right distance from their suns to support water — suggesting that life as we know it is at least possible, if not probable, all over the universe. The Search for Extraterrestrial Intelligence (SETI) has been active since 1960, when scientist Frank Drake — another of the great minds joining Breakthrough Listen — sought out radio signals from neighboring stars. The project will allow scientists to collect as much data on SETI in a day as they now do in a year. The data will be made available to the public, so anyone can help search for the radio signals that could be used to track down alien civilizations. Meanwhile, others at Breakthrough Listen will be working to improve our own signaling techniques, brainstorming the best way to send a message out into the cosmos. 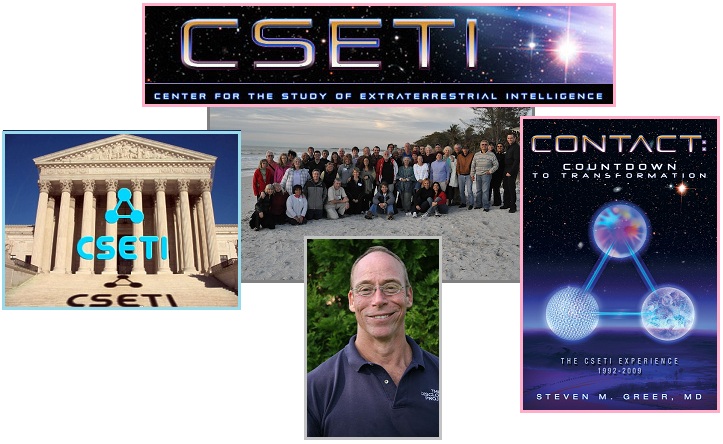 This sudden press to search for extra-terrestrial life by a notable such as Steven Hawking is a sign that discloser on the alien presence is about to take a big leap forward. That SETI has been funded by a Russian mogul shows that the effort to provide the Element of Doubt to those that will need it is a joint international effort. Just what percentage of the populace will be unable to adjust to the concept of intelligent life from elsewhere visiting the Earth is an unknown, but that this is a concern of some elements in the US and Russia is obvious. $100,000,000 is not a small sum.

SETI has been used from the start to provide the Element of Doubt, as we stated at the start of the ZetaTalk saga. Greer was recruited into the CIA program by a cancer scare. He survived, and has been on board ever since. Though he makes a profit at his seminars, he can be asked to say or do anything by the CIA and thus the claim that a mummified premature infant found in the Atacama Desert was an alien body. Hawking was recruited in 2010 to advise the public to avoid contact. If Greer is not believable anymore, Hawking presumably has credentials, and thus the comic dance will stumble forward in 2015.

Another crop circle in Russia, this time in Togliatti. Would the Z's care to comment on the validity of the design and its meaning? http://newsru.com/russia/22jul2015/krugi.html  [and from another] http://www.rt.com/news/310521-crop-circles-russia-tolyatti/  Crop circles emerge in Russia’s Samara region on 10th anniversary of same phenomenon.  The drone footage of the circles was shot by Aleksey Zagorodnikov, a resident who told local news that he and his friend were testing their quadcopters and saw nothing on that field on Sunday. The circles apparently appeared Monday night. The association of anomalous phenomenon and UFO researchers notes however that not a single stem has been broken inside the design pattern.

What is the message this Crop Circle design laid in Russia relays, along a river above the Caspian Sea, and why did the message get repeated exactly 10 years later, to the day? When originally laid in 2005 circle designs were giving a broad overall impression of the coming drama. There was the Serpentine magnetic dance that Nibiru and the Earth would enter, resulting in the daily Earth wobble. There was Orbit Lock which relayed that planets do not leave their orbits, though may be temporarily discombobulated by the passing rogue planet, Nibiru. There were Timeline diagrams, with magnetic lines either parallel or crossing the timeline to indicate altered magnetic positions of Nibiru as time passed. We, the Zetas, began interpreting circle designs at the start of the ZetaTalk saga but this Russian design was never addressed.

The Samara design shows Nibiru as the large double circle, the dominant bully. Earth is shown surrounded by both Venus (caught in the cup between Nibiru and the Earth) and the Earth’s Dark Twin (approaching from the side in their shared orbit).  The drama of these sibling planets looming close was just beginning in 2005. The approach of Nibiru, wherein it did not align with the Sun’s magnetic field, but rather crossed the magnetic field lines at an angle, was also shown, hinting at the magnetic bombardment from the N Pole of Nibiru to come. All of these issues are as relevant in 2015 as they were in 2005. The identical reminder design is to capture attention, to a degree that just another genuine circle design would not do!

As with the themes already mentioned recently, the crescent is showing the Earth’s reaction to the magnetic blast.  Warwickshire is making the statement that all other points being equal, such as the Sun’s emissions, the magnetosphere is bending. This is thus a phenomena that NASA cannot explain while trying to point to and blame the Sun. Klicnov is likewise referencing the magnetic crescent but is primarily referencing the three sibling planets caught in the cup in front of Nibiru. Nibiru approaches here from the left, blowing the Earth’s magnetosphere, but also squeezing Venus and the Dark Twin tightly around the Earth. The Dark Twin swings behind Earth to escape, eventually, but Venus will exhibit much confusion in front of the Earth before it escapes. The squiggly lines represent this confusion.